You are here: Home / Archives for Coastal Carolina Living

It’s time to catch some cobia!!  The rules have changed this year so beware.  The limit is now 1 fish instead of 2 fish per person but the length is still 33″.  Also, keeper season ends on June 20 compared to an open season before. That doesn’t mean we can’t keep catching them, it just means we have to let a few go.  The water around Morehead City is 68F which is the magic temperature for the bite to start.  Plus, the menhaden bait balls are in place. Mother’s Day is usually the de facto start of the bite and I will begin running trips on May 14. 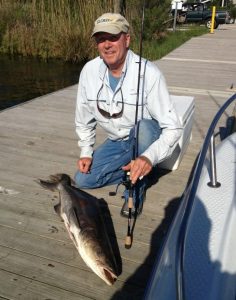 Just like the changing of the leaves in October, this time of year a lot of the bait in the creeks, rivers and sound begin to migrate to the ocean. This phenomenon is called the “mullet run.”  And once the migrating bait arrives at the inlets and along the shallows of the ocean, nearshore fishing fires off at the coast.  Speckled trout arrive at the jetties.  Our drum friends of August and September begin running the beaches. and the false albacores show up in large schools.  Catching an albie is like hooking a runaway rocket; they are fast and powerful.  To take advantage of this fishery, all you have to do is take a short boat ride down Adams Creek and exit the Beaufort Inlet.  From the surf to a couple of miles offshore you can see bait fish getting knocked in the air and birds circling above for their future meal.  Underneath this carnage are the albacores.  Take your medium heavy / heavy poppin’ cork old drum rods, add a sling silver type bait, cast it into the school, reel in as fast as you can, and hold on tight.    And… 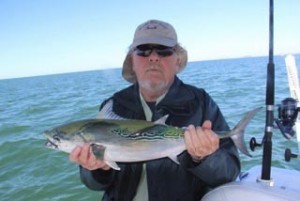 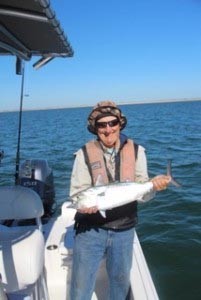 We are in peak season for the old drum spawn in the Neuse River and the Pamlico Sound.   Fisherman using poppin’ corks and bottom fishing are cruising the waters of the Neuse from below New Bern to Brant Island Shoal in the Sound.   One of your biggest decisions is do you go right or left as you leave the Oriental harbor and enter the Neuse.  One thing that is for certain is that Oriental is in the center of the action.  Whether you catch a 50” trophy fish or a keeper slot size puppy drum (18”-27”), you should catch something.   This boy was not a trophy but he will sure be good blackened.

don’t let the big one get away…

We use two methods to catch old drum; bottom fishing and subsurface fishing.  For bottom fishing we use the Owen Lupton rig.   The Owen Lupton rig consists of a no. 8-10 circle hook with a 5” 50# leader and a 3oz.-4oz. egg sinker.  Bait the hook with mullet or menhaden steaks for the best results.  Ideally you will have multiple rods and spread your baits at various depths on the ledges and drops.  Make sure that you check your bait every 10 minutes as we have a lot of bait stealers in the water.  For subsurface fishing we use popping corks.  The popping cork makes sounds like bait fish breaking the water and attracts the old drum.  The rig consists of a popping cork with about 2’ of 50# leader attached to a no. 5-7 weighted hook.  Attach your favorite grub or paddletail to the hook and head for the drops.  When you find bait on the surface, cast and stop popping.   Good luck catching that trophy fish and……

Don’t let the big one get away….

I went fishing Saturday with the reigning Oriental Tarpon Tournament winner, Henry Frazer, and we took a beating.  It was not a good day for tarpon fishing with winds out of the NE 15-20 but I had chores to do on Sunday, so Saturday was it.  After 4 hrs. of getting beat up in the boat, we decided lunch at M&M’s was a better option.   Sunday was chore day and wouldn’t you know it, the water was grease flat.  I knew some of my buddies were going to catch some tarpon and I felt kinda bummed about it.  By the afternoon my chores were done and when I stepped out of the shower from cleaning up, I noticed that I had missed a call from one of the local guides, Capt. Greg Voliva of Four Seasons Guide Service.   I called him back and he said he was going to run to the Sound and look for tarpon and asked if I wanted to go.  Well my wife was walking the dog and the lasagna for dinner was in the oven….of course I wanted to go.  The note sums it up.  I stepped onto Greg’s boat at 6pm. and stepped back out onto my dock at 9pm.  In between we got hit by two tarpons.  We did not get a hook set on the first one.  On the second one I heard Greg yell “…there it is” and he headed to the rod on the starboard stern only to stop abruptly.  The tarpon was in the air heading toward the stern of the boat.  A smart man does not run toward a 100+ pound tarpon, five feet in the air, gills flared, heading straight at him.  The tarpon missed the boat and the slight delay made us miss the hook set.  Hey, that’s tarpon fishing.  Oh yeah, I will be having left over lasagna for lunch today.

Don’t let the big one get away….

Over the July 4th holiday, Oriental was alive with visitors from several states attending our Croaker Fest celebration.  For a small city with limited public parking, finding a prime parking spot was challenging if you didn’t know where to look.  I found one just fine.  I had no valet service.  I had no parking attendants.  All I had were shorelines, flounders, puppy drum and speckled trout.  Instead of eating fried dough and cotton candy, I went on a kayak fishing trip up the river and into several creeks.  The Neuse River flows downriver from southwest to northeast as it passes by Oriental.  If you pay attention to the wind and head in the correct direction, it will push you…albeit some paddling required.  On Sunday the light northeast wind provided much of my push as I started several creeks away from Oriental and fished my way upriver to the past Oriental.  My reward was a fist full of fish….and free parking.