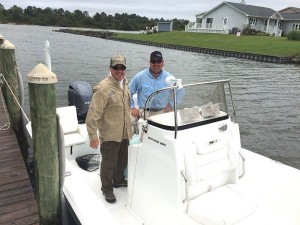 Capt. Eric Ciocher and the Ultimate Catch TV Show were in the area last week filming a show for the 2016 season for The World Fishing Network. When Eric arrived on Monday, we had small craft advisories. A few days later when he left, we had small craft advisories. In between we fought high winds and rain but we still managed to catch enough fish for the show. During the filming we caught flounder, trout, redfish, stripers and bass. Eric and his cameraman love the area and want to come back again. Maybe we can provide them some Carolina blue skies next time.